To follow Jesus with a Franciscan heart is to lead one’s life with the charism of St Francis. St Francis had a passion for peace. He searched for simplicity. He respected creation. He had empathy for the poor and lived out his life in self giving. 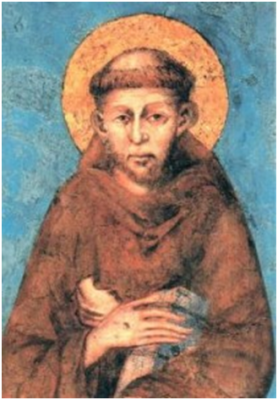 PRAYER BEFORE THE CRUCIFIX

This is Francis’ earliest recorded prayer. It is found in some versions of the Legend of Three Companions. This legend about Francis claims to come from his companions: Leo, Angelo and Rufino. Francis is said to have made this prayer in his youth as he knelt before the crucifix in the ruined church of San Damiano in Assisi (reproduced opposite). He felt God was calling him away from his life as the son of a merchant and away from his ambition to become a knight through battle, but he did not know what to do. Afraid and confused, he asked God for guidance.
Perhaps you are trying to discern what God is asking of you at this point in your life. I invite you, if you wish, to pray with Francis:

Most High Glorious God Enlighten the darkness of my heart
And give me true faith certain hope and perfect charity, sense and knowledge,
Lord That I may carry out Your holy and true command
Amen 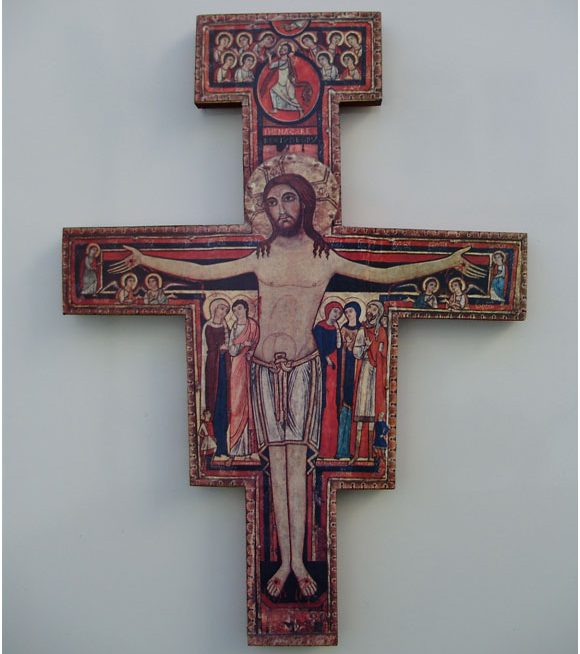 As he contemplated the Crucifix, Francis heard Christ speaking to him.

“Francis … go rebuild My house; as you see, it is all being destroyed.”

Francis sprang into action to repair the Lord’s houses, beginning with that ruined chapel in which Christ had spoken to him. For some time, he did not understand the full meaning of Jesus’ request. Francis rebuilt three ruined churches in the area: San Damiano, San Pietro and Saint Mary of the Angels, known as the Portiuncula. As time went on, he came to realise that the house of Christ he was called to rebuild was actually the Church of Christ, not a physical building but a spiritual one. This mission was much vaster than he had at first understood. Francis began to see that Christ’s Body the Church was ‘…all being destroyed’, as the voice from the Cross had told him. In the members of this Body, the people of Francis’ time, Christ was still suffering. It was the worldwide Church of God’s people that Francis was called to rebuild and heal. This was the life and mission of Francis and the communities of brothers and sisters he founded

How do you see the children of God suffering today?
Do you feel moved to help in some way?

A group of men who were inspired to join Francis’ way of life developed into a worldwide missionary fraternity known as the Order of Friars Minor or Lesser Brothers. They dedicate themselves to spreading the message of Jesus Christ while living as He did, in obedience to God, in chastity and without any possessions.

St. Clare (1194-1253) came to share Francis’ vision of universal brother and sisterhood in Christ after hearing his preaching. She helped him to bring this vision to life through a new community of contemplative religious women. This Order, known today as the Poor Clares, began in the monastery of San Damiano which Francis had worked to rebuild.

Moved by the preaching and joy of Francis and his brothers, many people in the secular state felt called to follow their way of life. However, they wished to remain in society, perhaps with existing commitments to family or work. To these men and women, Francis gave spiritual advice and wrote letters, and later appointed his friars to be their spiritual guides. They grew into the Order of Secular Franciscans, as it is known today. This Third Order of St. Francis, soon developed a second branch. Groups of ‘Brother and Sisters of Penance’ began to live in community and to profess vows of poverty, chastity and obedience. By the end of the 13th Century these tertiary communities were common. In 1324, they were officially recognised as ‘religious’ by Pope John XXII. In 1447, Pope Nicholas V recognised them as a religious Order, The Third Order Regular of St. Francis.

While some TOR communities can trace their origins back to this time, many others, like the Franciscan Missionary Sisters of Littlehampton, were founded in the last 200 years and adopted or were given the Franciscan Rule. They later responded to the call of the Second Vatican Council to rediscover the spirit of St. Francis as their founder. 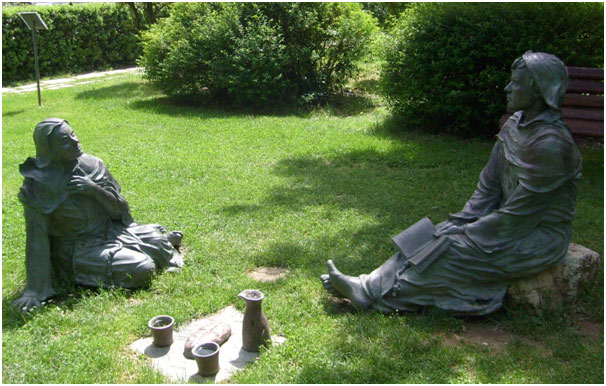 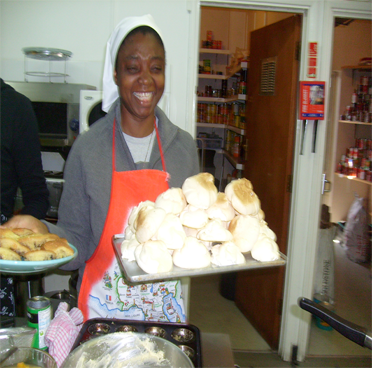 At times we all struggle to overcome our fears in reaching out to others with love. We feel a need for help and strength beyond our own power in order to be able to do what we know to be right. In the year before his death, Francis wrote this prayer on behalf of all his brothers and sisters for God’s help in their mission:

PRAYER FOR THE ENTIRE ORDER

“Almighty, eternal, just and merciful God, grant us in our misery that we may do, for your sake alone, what we know you want us to do and always want what pleases you, so that, cleansed and enlightened interiorly, and fired with the flame of the Holy Spirit, we may be able to follow in the footprints of your Son, our Lord Jesus Christ, and so make our way to You, Most High, by Your grace alone. You Who live and rule in perfect Trinity and simple Unity and are glorified God All Powerful for ever and ever.”

Today, Assisi is known as the City of Peace because of Saints Francis and Clare.

PEACE PRAYER (IN THE SPIRIT OF ST. FRANCIS)