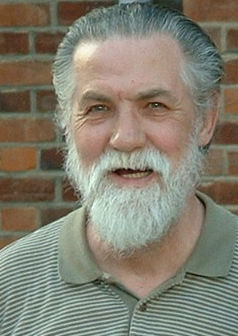 As a child, Brother Malachy came to live with the Sisters in Littlehampton during the Second World War when his hometown of Brighton was being bombed.
Later, as a young man, he did his National Service in the Royal Artillery. He served in Egypt during the Suez Crisis. On return home, he worked on various jobs, gardening, a dustman and cultivated an allotment in his own time. His family moved to Liverpool and there he got a job at Speke Airport, now John Lennon Airport.
In the 1960s, he joined the Friars Minor and did his postulancy in Woodford Green. He took the religious name ‘Malachy’ in tribute to our Sister Malachy FMSL, who had helped to care for him in Littlehampton as a boy. As a student friar, he trained in cabinet making in a local college. He did his novitiate in Chilworth. After profession of vows in 1970, he was posted to East Bergholt as sacristan. In 1974, he went to Forest Gate and did some of the cooking and looked after the door. In 1977 he served in Glasgow for a time as door-keeper. He then served as cook, sacristan and door-keeper in the Friars’ communities in Ascot, Gorton, Manchester and then in Forest Gate until that friary closed in 2002. After this, he was based in Woodford on light duties as he gradually became frailer. As a friar who served in the area of hospitality for most of his life, he was always concerned to make sure that each community member and visitor was included and provided for.
He used to take his holidays each year in Littlehampton, where the Sisters always looked forward to welcoming him back. He was a gentle and cheerful brother who was solicitous to pray for many people’s needs and intentions during his life on earth.
God called Brother Malachy home on 31st December 2020. May he rest in God’s peace and continue to pray for us.